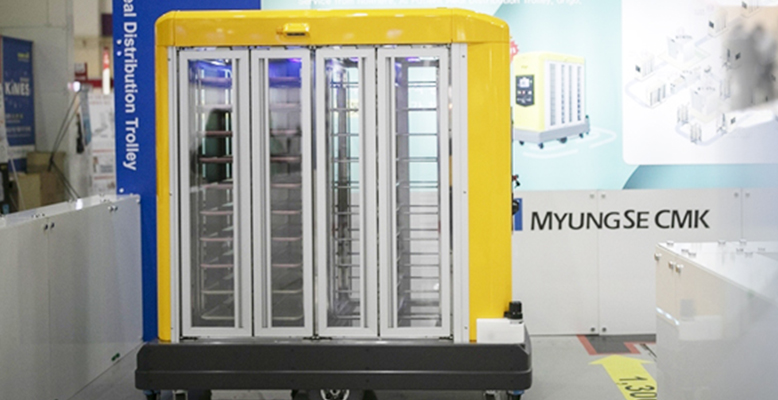 In 2019, Myungse CMK (Myungse) approached Yujin Robot (Yujin) with an idea to turn Myungse’s meal trolleys fully autonomous. Since the signing of MOU in the beginning of 2020, Yujin and Myungse together have been working on the PoC (Proof of Concept) and successfully showcased it at KIMES (Korea International Medical & Hospital Equipment Show) 2021 exhibit.

Efficient and quality meal delivery in hospitals is critical. Myungse is the first company in South Korea to introduce the innovative electromotive meal delivery system with real-time heating and cooling. Although a huge improvement from manually driven carts that are much more laborious to lug around the hospital, Myungse’s meal trolleys nevertheless require human assistance at all times. A driver would control an electromotive trolley with a lever while viewing the blindsides through the screen. As important as this role is, however, it is an extremely inconvenient and exhausting job, especially for common non-electromotive meal trolleys that can weigh up to 500 kg. Consequently, the trolley drivers frequently quit and are often replaced. Faced with this shortage of manpower and tired workers, the need for automating the hospital food delivery system is undeniable as robots can operate continuously without needing any rest day.

The idea to robotize the meal trolley itself was revolutionary given that the standard solution to automating the meal delivery process would involve integrating two separate systems, namely the existing meal trolley and the autonomous mobile platform, which would require double the cost and double the space. Combining the two into a single machine operating as a single system would allow for a much smoother workflow and easier integration in hospitals.

Yujin Robot’s end-to-end robotization solution exactly addresses this issue. After sessions of detailed consultation, Yujin’s skilled engineers would thoroughly transform the existing meal trolley into an autonomous machine that maneuvers through the hospital hallways unmanned. Implementing autonomous driving feature onto an existing machine is a totally different task from just placing a structure on top of a mobile platform. This is a uniquely customized service that requires at least 6 months of PoC development, during which time the manual machine’s payload, driving mechanism, motors, drivers, hardware, software, sensor attachments, safety system, UI/UX and more are all modified. The initial time required for PoC may seem substantial, but it is an investment that will lead to loads of long-term benefits.

The biggest technical challenge to dispatching autonomous meal trolleys in the hospitals is the elevator integration. Elevator integration within Yujin’s FMS (Fleet Management System) means when a robot receives a command to go to a certain floor, the elevator server will be notified when the robot is in front of the elevator, send the elevator to the robot, and transport the robot to the correct destination floor. As elevators cannot be shared among humans and robots due to workflow, crowding, and safety reasons, there must be a separate elevator line dedicated to robot use, which, usually, would be a staff-only elevator with designated times for robots.

Despite these challenges, the interest level from major hospitals in autonomous meal trolleys is very high. Robotizing meal trolleys in hospital settings, where labor efficiency and patient satisfaction are of greatest concerns, would greatly improve overall customer experience. Yujin’s robotization service is not just aimed at Myungse’s electromotive meal trolleys, but all manual machines. Beyond the hospital end-users, robotizing the existing manual machines for many businesses is a profitable fast track to positioning themselves at the frontlines of the quickly advancing technological landscape.